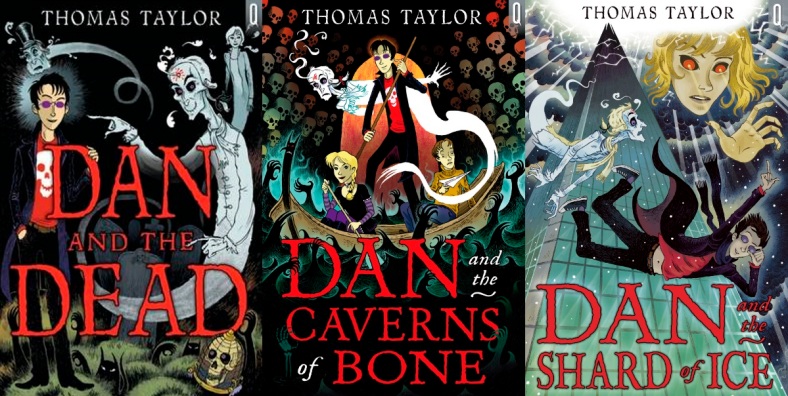 This review first appeared on GeekDad on 30th June 2015

Thomas Taylor is possibly one of the most famous author/illustrators you’ve never heard of. In illustrator mode, Taylor gave the world the original cover of Harry Potter and the Philosopher’s Stone. A book that quite a few people have read. Those of you who follow Mike Carey’s superlative ‘Unwritten’ series will know that its central character is ‘Tommy Taylor.’ I don’t know whether this is a coincidence but considering how Carey’s Potter-channelling graphic novel series drips with literary allusion and reference, I very much doubt it.

But enough of the fan-boy trivia.

I first encountered Taylor’s work in the form of his Young Adult thriller, Haunters. This is a well-executed novel about teenagers who use their dreams to travel through time and space. I very much enjoyed Haunters; it’s a book which showed potential for further instalments and I am rather vexed that a follow-up has yet to appear. At that time, the first of Taylor’s Dan and the Dead series was available but, as it is aimed at the bottom end of my preferred reading age (pre to early teens), I never quite got around to picking it up.

Several years later and having become fond of Taylor’s creativity celebrating Facebook page, I noticed that Dan is now having his third outing. My oldest son is now at the bottom end of the books’ reading age (9), so I dropped Thomas a line and asked nicely whether he’d be prepared to send me a book in exchange for a review. His UK publisher, Bloomsbury was kind enough to send me all three, and so here I am.

As Dan concedes in the opening line of the book, he’s “… like that kid. You know, the one in the film…”

That is the series’ central premise; Dan can see the dead. Restless spirits who have unfinished business. For a small fee Dan acts as a closer, giving peace and rest to troubled ghosts. It’s not a new premise, but it’s an interesting one. With hindsight, it’s easy to say that Dan of the Dead is obviously a first novel. It’s well crafted, readable but it doesn’t particularly stand out from the pack.

Dan is a fairly typical young teen character; a talented outcast. His most common companion, Simon, has been dead for hundreds of years. Together they form a team. A young Sherlock Holmes and late Dr. Watson. The partnership works well, and delivers plenty of light-hearted supernatural sleuthing. The first book focuses around a morally bankrupt gangster and his ring of blackmailed children. It’s set in and around Dan’s school life in London.

The first book may not glow as brightly as later installments but it forms a solid base on which the series is built. The rules and precepts for Dan’s power are established, as is what being a ghost in Dan’s world means. To reveal the finest aspect of the book would be too big a spoiler, but it centers around Dan’s payment for his services. Taylor has set himself up with a powerful device with which he can build a range of stories and character angles.

In the second book of the series, Dan and the Caverns of Bone, Taylor moves up a gear or two. Set in Paris, with much of the action taking below the ground in the city’s catacombs, the book has a more macabre feel to it. Nevertheless the same light tone of the first book pervades, and, if anything, this book would appeal to slightly younger readers. In Caverns of Bone a strong sense of theme starts to develop: standing up for the downtrodden.

To all intents and purposes Dan is a geek. A geek who can see the dead but essentially a boy with his own style and a worldview that differs from the norm. Inevitably he comes under the scrutiny of the school bully. Dan stands up to him, and a less-than-fair teacher, not always successfully, but doggedly. He takes another child under his wing; a paper plane-making math genius.

I like this geeks-together aspect of the books. Since the ghosts in the stories are victims of something, the novels convey a strong sense of the importance of righting injustice. In a world where community seems to be corroding, Dan’s sense of fair play and looking out for the underdog is an important idea. Doubly so, as Dan hardly comes from a position of power himself. There is a strong sense that the individual can make a difference.

The latest installment, Dan and the Shard of Ice, is set almost entirely within in London’s iconic new skyscraper, The Shard. The Shard seems to have captured authors’ and creators’ imaginations; I’ve read some great books set there and then there was the Doctor Whoepisode The Bells of Saint John.

In Shard of Ice, the building is being terrorized by a malevolent poltergeist. In an attempt to find out what is going on, Dan sneaks into the entourage of a famous TV psychic. Again Dan tries to come to the aid of the disadvantaged. The fraudulent “Venn Specter” preys upon the gullible and recently bereaved. In a sub-plot to the novel Dan tries to uncover the TV star’s duplicity and in doing so learns an important lesson about the bulletproof nature of being rich and powerful. The plot here again brings home a message of standing up for what is right, though this time there are less predictable consequences.

Shard of Ice sees a stronger overreaching story arc begin to develop. The first two novels are interesting, but largely stand alone. Shard of Ice suggests there is a bigger picture and a wider supernatural world. This gives the series a greater coherence, making the the third book the most satisfying read of all.

With his Dan and the Dead books, Thomas Taylor has developed a gentle entertaining series, with a strong message. The books are slim, fairly quick reads for 10- to 14-year-olds and are well-presented with lots of illustrations drawn by the author, a few of which are shown here with Taylor’s permission. All three are satisfying reads, each better than the last. With the final installment ending with a number of unanswered questions, I am thoroughly looking forward to reading book 4. And Thomas, whilst you’re there, how about a sequel to Haunters too?!

Many thanks to Thomas and Bloomsbury for sending me copies of the books to review. All artwork Copyright Thomas Taylor

About ten or so years ago I stumbled across Ashok K Banker’s Prince of Ayodhya, the first book of his Ramayana retelling. I found his (originally) six volume series wonderful. I knew very little of the epic on which the series was based, but it had everything a fantasy reader loves. Gods, princes, demons, magic weapons, epic battles and…er…flying monkeys. Paper copies aren’t in great supply these days, after Ashok spat his dummy out over editorial changes made to the UK/US editions, but ebooks appear to be available on Amazon. They are excellent and I whole-heatedly recommend them.

Those six books sparked a love affair with the Ramayana. I have read a couple of different, more traditional translations; there is something so compelling about the story. When I heard about David Hair’s Return of Ravana, Ravana being the ten headed villain at the centre of the Ramayana, my curiosity was piqued.

The action in The Pyre switches between two timelines. One is set in modern times, the other in AD 769. Both narratives take place in the same area of India, Rajasthan. The modern strand opens in the city of Jodhpur and the historical thread centres around nearby Mandore. In 769 Mandore was a thriving city, ruled over by the tyrannical Ravindra-Raj. Ravindra-Raj predicts his own death, and insists that his funeral must take a very particular course. At the heart of his wishes is the rite of sati, in which each of his seven wives will throw themselves on his pyre.

In modern India, three teenagers find themselves drawn together by virtue of sharing disturbing dreams and visions. They are each reincarnations of the players in the events that transpired in ancient Mandore over a thousand years earlier. The three are thrown into a battle that has been fought countless times before. This time, will the outcome be different?

As The Pyre progresses its inspiration from the Ramayana becomes more overt. Initially, it is an intriguing ghost story, spliced with a heroic tale of love and rescue. As the action comes to a head, the Hindu wheel of life starts to turn and the epic battle between Rama and Ravana makes itself felt. David Hair’s writing is sharp; his action sequences exciting. The demonic ghosts are more than a little scary, and the story contains some genuine surprises. Like the Ramyana, The Pyre is a story about love, honour, loyalty and fighting for what you believe. This is the opening salvo in Hair’s Return of Ravana sequence. Whilst satisfying in its own right there a lots of lose threads and many turns of the wheel left before the end of what I hope will be a memorable and enjoyable saga.

The Pyre is an excellent fantasy novel. If you’re familiar with the tales of Rama and Sita, you’ll find much to enjoy, and if not, then David Hair’s introduction to the legends are an excellent place to start.

Many thanks to Andrew at Jo Fletcher Books for sending me a copy of the Pyre. It’s out on June 4th